Pakistan vs Australia 2018, 1st T20I, LIVE Streaming: Teams, Time in IST and where to watch on TV and Onli

Full details of where you can watch and follow the live streaming of the 1st T20I between Pakistan and Australia, and also the live score and latest updates.

Full details of where you can watch and follow the live streaming of the 1st T20I between Pakistan and Australia, and also the live score and latest updates.

What: Pakistan vs Australia, 1st T20I

Australia may have cruised to a seven-wicket win over UAE in the one-off T20 fixture, but their real test lies ahead on Wednesday when they take on Pakistan. The home team got the better of Australia twice the last time these two teams were involved in a T20I series the tri-series in Zimbabwe including the all-important final, and Pakistan would want to build on that following the triumph of the Test series.

Australia took the Trans-Tasman T20 series earlier this year in February but a lot has transpired since. Steve Smith and David Warner are no longer part of the team. But the presence of specialists in the T20 squad gives them a chance to make amends for the Test loss. Glenn Maxwell would have a point to prove, while captain Aaron Finch and Chris Lynn are T20 specialists. The returning Adam Zampa strengthens the spin department, and the likes of Billy Stanlake, Nathan Coulter Nile and Andrew Tye are more than capable of making up for Mitchell Starc, who remains a doubtful started despite nursing a hamstring problem.

Pakistan s T20 record stands at a winning percentage of 50 percent, and even though the win in Zimbabwe may not mean much, they are more than capable of continuing their hot run over Australia. In their last T20, Fakhar Zaman helped Pakistan pull off their highest successful T20I chase. The left-hander had an unforgettable tournament with 278 runs in five matches and will be expected to sustain it here as well. Asia Cup disappointment aside, Pakistan have been ruthless in the UAE.

Weather: Pleasant conditions with a maximum of 33 degrees

The return of Mohammad Hafeez solves Pakistan s opening conundrum as he becomes the most feasible option to partner Fakhar at the top. Babar Azam, Shoaib Malik, Asad Shafiq and skipper Sarfraz Ahmed will comprise the middle order, and Shadab Khan and Imad Wasim are the two most likely spin candidates. This opens the possibility of Pakistan playing three fast bowlers which may belong to Wahab Riaz, Shaheen Afridi and Hasan Ali.

Australia are likely to play the same XI that took on the UAE. They have found a revelation in D Arcy Short who averages almost 50 in T20s with 445 runs in 11 games opening the innings. Put in Aaron Finch followed by the explosive Lynn and Maxwell and it makes for a formidable top order. Ben McDermott and Alex Carey are early into their careers but were impressive in the JLT Cup for their respective franchises. Zampa and Ashton Agar are expected to get purchase from the Abu Dhabi surface.

All I can do is score runs in white-ball cricket and whatever comes from that, I ll be happy to take it. I just try to back myself and don t really think about what I m averaging. It s all about being consistent for me and if I m consistent with what I m bringing, hopefully I m scoring runs. D Arcy Short, Australia opening batsman. 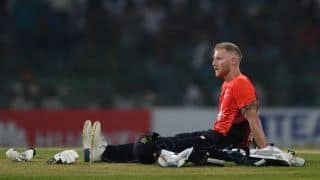