Pakistan vs Australia 2018, 2nd T20I, LIVE Streaming: Teams, Time in IST and where to watch on TV and Onli

Full details of where you can watch and follow the live streaming of the 2nd T20I between Pakistan and Australia, and also the live score and latest updates.

Full details of where you can watch and follow the live streaming of the 2nd T20I between Pakistan and Australia, and also the live score and latest updates.

What: Pakistan vs Australia, 2nd T20I

Having tasted defeat in the Test series, the belief was that Australia would come out strong in the first T20, but as it turned out, they imploded, just like they did in the Test series against a full-blooded Pakistan attack. Now, as the attention shifts to the second T20, Australia find themselves once again chasing a series and look to avoid a series defeat when they take on Pakistan in Dubai on Friday.

Even with a different captain, Australia address the same issue, batting. Chasing 156, they were shot out for 89 with Imad Wasim and Faheem Ashraf shredding the top order like it was some school team. Aaron Finch termed in a car crash in a slow motion, with Glenn Maxwell, Chris Lynn, Darcy Short and the captain himself getting dismissed in single digits. This was exactly what Australia did not need after their bowlers Billy Stanlake and Andrew Tye (three wickets apiece) had fought back well to restrict Pakistan to 155. One match and it can be another scarring defeat ahead of the South Africa and India series. Something has got to give.

Pakistan on the other hand sit comfortably at the cusp of another series win at home. Babar Azam scored his third consecutive half-century but that is where the problem starts. After his 68 and Mohammad Hafeez s 30-ball 39, the next six batsmen combined to score 12 runs, Asif Ali, skipper Sarfraz Ahmed and Faheem Ashraf would have to present a better outing against the likes of Stanlake, Tye and Adam Zampa.

When your team wins by 66 runs in a T20 game, there is no reason to tinker with the Playing XI, and with the series on the line, Pakistan would want to field the same XI that annihilated Australia two night ago in Abu Dhabi

When the likes of T20 specialists like Maxwell, Lynn, Finch and Short form your top order, you usually wouldn t want that to change. But as it was evident from the previous encounter, even the best can fall. Finch dropped a hint that Australia could make a few changes for the second game in Dubai by introducing allrounder Mitchell Marsh into the equation. Nathan Lyon was phenomenal in the preceding two-match Test series which Pakistan won 1-0 so the offspinner can get a look-in too. 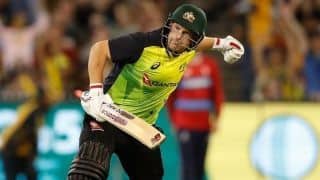