Glenn Maxwell's scored 71 off 55 balls to set up Australia's 80-run win against Pakistan in the third ODI.

After playing a pivotal role in Australia s historic T20I series win in India earlier this year, Glenn Maxwell, on Wednesday, once again starred for Australia as the Aaron Finch-led side beat Pakistan in the third ODI in Abu Dhabi to win the five-match series with two games to spare. (Pakistan vs Australia, 3rd ODI: SCORECARD)

While skipper Finch led from the front, scoring 90, coming closer to become the first Australian to score three consecutive ODI hundreds, Maxwell scored 71 off 55 balls guide Australia to 266/6. Chasing 267, the Shoaib Malik-led unit were bowled out for 186 as Pat Cummins and Adam Zampa starred with the ball.

While Australia were in a spot bother after they lost Finch in the 42nd over, Maxwell took the charge and helped Australia cross 260-run mark. (ALSO READ: Aaron Finch, Adam Zampa fire Australia to ODI series win)

Talking about how he went about his knock, Maxwell said: “Once Finchy got out it was up to me to make sure I was there for as long as possible towards the end.

“I got a little bit of luck being dropped (on 27) but to make the most of that and control the back-end was nice and it gives us something we can bowl at,” added Maxwell.

Finch lauded Maxwell after Australia s 80-run win. The Australian captain highlighted how the maverick player contributes for the team with bat, ball and in the field. (ALSO READ: Got no idea how we re going to work out the World Cup schedule: Pat Cummins)

“Maxi is a player who people expect so much from every time he plays – because he has so much brilliance at times. But I think what people don’t see at times, when they get frustrated with him, is the amount of stuff he does in the field – if he averages 20 in a series, he might save 20 runs in the field as well. He bowls overs, gets some wickets. It all adds up to a great package. And the fact he’s batting at six at the moment – to give us that little bit of extra firepower towards the back end – is something we’re conscious of and it’s a role he fits really well, said Finch.

Finch then highlighted the importance of having players who can hit the ball to the all corners of the ground. all-rounders in the Australian set-up, especially in the slog overs. (ALSO READ: In major boost to Australia s World Cup chances, Josh Hazlewood confirms return to bowling)

“Guys who can hit the ball 360 (degrees) are so hard to bowl to, as a captain they’re a nightmare. There’s a handful of them in the world now. You’ve got Jos Buttler who can scoop you over the keeper’s head, but also hit over mid-off. They’re two obvious places where you always have a fielder up when you’ve got five (fielders outside the 30-yard circle). When you need both of them out – it creates some problems. Maxi is no different to that,” concluded Finch. 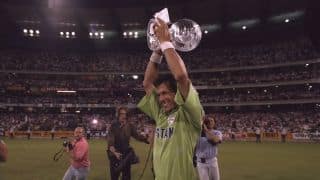 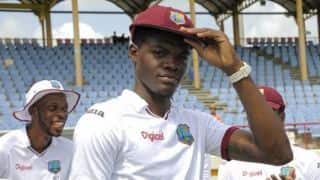