Langer says Maxwell, who led Australia to victories in the third and fourth ODI against Pakistan with successive half-centuries, can emulate the consistency of Kohli who averages close to 60 in one-day cricket.

“The challenge for him [Maxwell] – and I’ve said this to him – is we’ve just seen Virat Kohli, who is an extraordinarily talented player. He averages 60 in ODI cricket,” Langer said. “In 99 games, Maxi averages 32 or 33. He can be Virat Kohli. He has got the talent to do that. It’s obviously a massive challenge, isn’t it? His next challenge is to become a great ODI player and then potentially a Test player, so there’s huge upside.”

Maxwell’s run of form stretches back to the limited-overs tour of India where he scored a second T20I century as Australia won three-match series 2-1 before carrying the momentum into the ODI series that followed which they won 3-2. Against Pakistan, they currently lead the ongoing five-match series 4-0 with the final match to be played on Sunday.

“He’s such an important part of our team. He brings energy to everything that he does – whether it’s fielding, running between wickets, his strike-rate,” Langer added.

In 99 ODIs, Maxwell averages 32.87 while scoring 2630 runs with one century and 18 half-centuries. Langer feels the 30-year-old needs to be more consistent in order to justify his immense talent. “He’s getting better with his bowling all the time. He’s getting the rewards for that. It’s great to see. We all see it and everyone talks about it, he’s got a huge amount of talent. His challenge has always been to deliver on that talent and he’s done it in patches,” he said. 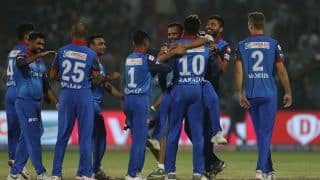