Australia were 75 for 3 at the end of 15 overs during the second One-Day International (ODI) against Pakistan at Dubai. George Bailey was batting on 7, and Glenn Maxwell was batting on 2. Australia have played well, and batted with intent but they’ve lost wickets at crucial intervals. David Warner, who was looking good and had scored 29, was dismissed playing an unnecessary rash shot.

Earlier, Pakistan were bundled out for 215 despite a superb 126-run opening partnership. Shehzad brought up his half-century hitting a boundary by playing a stylish shot on the off-side. Sarfraz followed him and, reached the landmark for the first time in his ODI career. It was all going well for the Pakistanis, until the start of the 26th over which was bowled by Xavier Doherty. Shehzad hit one hard, but it went straight into Steven Smith’s hand.  Sarfraz followed suit, and fell in the very next over to Mitchell Johnson.

All went downhill from there. 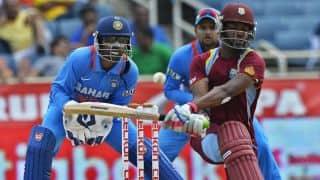