The going only gets tougher for the Pakistani camp on tour of Australia, which has suffered four defeats on the trot across two formats.

The going only gets tougher for the Pakistani camp on tour of Australia, which has suffered four defeats on the trot across two formats. Pakistan, on Friday, began their five-match ODI series with a huge defeat by 92 runs, and the chances of their fortunes improving in about a day s time for the second ODI stand bleak. Pakistan had already lost key personnel in Sarfraz Ahmed and Mohammad Irfan before the start of this series, and their captain Azhar Ali suffered a hamstring pull during the Brisbane ODI, which only increases their woes. Azhar has been ruled out of the second ODI and Mohammad Hafeez has been named Pakistan captain. The second ODI will be played at the Melbourne Cricket Ground (MCG), a venue where Pakistan suffered one of their most shocking defeats in the Test series.

Pakistan had only themselves to blame after the defeat in the first ODI. The visitors got rid of the heavy-scorers in David Warner and Steven Smith for a total of 7 runs, and even sparked a collapse of sorts in the Australian batting ranks. But a gritty century by Matthew Wade his first in ODI cricket and a brisk 60 ensured Australia had more than enough on the board to daunt Pakistan. The visitors were bowled out for a mere 176 in 42.4 overs in their chase.

Chasing 269 against a formidable Australian bowling attack, despite Josh Hazlewood being rested, was never a mountainous task for Pakistan. The wicket at The Gabba in Brisbane was slow but assisted batsmen, which Australia made full use of. However, Pakistan approached their chase with lot of perplexity, as never in their innings they looked like having an actual plan.

Pakistan began sedately, impressing that they want to preserve wickets and chase with caution. However, their chances went bleak as soon as Azhar started hobbling. For unexplained reasons, Babar Azam who scored 3 consecutive ODI tons versus West Indies last year was demoted to No. 4 to accommodate Mohammad Hafeez at No. 3.

Sharjeel remained quiet for most of his innings, looking to work the ball around and not going for his strokes for which he is famous for. Hafeez disappointed with the bat, while Azam top-scored with 33. The rest, including Umar Akmal, Mohammad Rizwan and Imad Wasim got starts, but none could finish the job for their side.

Australia will fancy taking a 2-0 lead and move closer to clinch the ODI series, with a victory at Melbourne. Pakistan challenged the hosts with a flurry of wickets early on whey they decided to bat first, reducing them to 78 for 5 at one stage. But Australia recovered to post a daunting 268 for 9, which was more than enough for their bowlers to prey on. James Faulkner claimed 4 for 32, whereas Pat Cummins grabbed 3 and Mitchell Starc claimed 2 wickets.

Hazlewood, who was rested for the first ODI, is slated to join the Australian side ahead of the second ODI. Australia handed out ODI debut to Billy Stanlake in the first game, but the lanky pacer struggled for fitness during the game. Stanlake bowled 3 wicketless overs early on in his debut, and replacing him with Hazlewood would only increase Australia s firepower.

Australia have not lost to Pakistan since February 1985 at the MCG, and have defeated them in 9 ODIs since. Having lost their captain and the best batsman on tour, Azhar, Pakistan will only hope to play better cricket and show more intent with the bat. 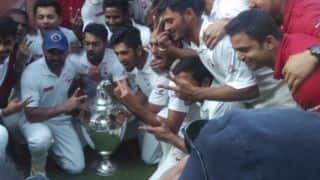 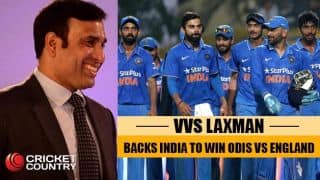