Younis Khan reached his third consecutive century in the second Test against Australia at Abu Dhabi. Younis played some gorgeous shots and hit five boundaries en route to the landmark. He also combined well with Azhar Ali to form a mammoth 176-run partnership.

After lunch, Mohammad Hafeez and Azhar Ali continued to keep the scoreboard ticking at a snail’s pace for Pakistan. Between the 30th over and the 34th over, just three runs were scored as Nathan Lyon and Peter Siddle bowled tight lines to keep the Pakistani batsman quite. However, in the 35th over, Mitchell Johnson managed to pick up the wicket of Hafeez. It was a brilliant delivery, that Hafeez wasn’t able to judge, and ended up edging to give Brad Haddin a simple catch.

Younis Khan came to bat after that, and hit a boundary first ball. Australia are looking to bounce back after suffering a 221-run defeat in the first Test, while Pakistan are looking to win their first Test series against Australia in 20 years. 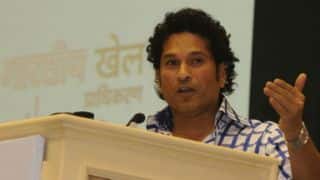