Xavier Doherty floated a good length delivery on the middle stump and Alam went to sweep it, Smith who was fielding at slips ran off straight to the leg-slip position and took a brilliant catch. Alam was dismissed out before scoring. 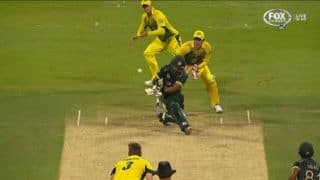