Pakistan still trail Australia by 267 runs, but more importantly need 68 more runs to avoid follow-on, but they have just two wickets in hand.

Just like on Day Three, the first session of the fourth day in the third Test between Australia and Pakistan has been washed out due to rain and wet outfield. Players take an early lunch and play might resume after the break provided the umpires feel that the conditions are good to play. Pakistan ended Day Three at 271 for 8, with Younis Khan fighting a lone battle with an unbeaten 136. This is Younis 34th Test ton, his first in Australia. With this century, Younis has become the first-ever player to score a century in 11 different countries. Pakistan still trail Australia by 267 runs, but more importantly they need 68 more runs to avoid follow-on, but they have just 2 wickets in hand.

Pakistan lost as many as 6 wickets on Day Three. Azhar Ali and Younis put on an impressive 146-run stand for the third wicket, after Pakistan were reduced to 6 for 2. A mix-up between the two batsmen saw Azhar Ali being run out for 71, just when he looked set to convert this into a big score. Following Azhar’s exit, Pakistan lost wickets at regular intervals. They lost 5 in the final session and find themselves in deep trouble now. Nathan Lyon was excellent on Day Three, picking up 3 crucial wickets, including that of Pakistan skipper Misbah-ul-Haq.

Wicketkeeper Matthew Wade did not take field on Day Three due to illness and as a result Peter Handscomb had to substitute for him behind the wickets. Wade is however expected to take field on the fourth day. Also, Matt Renshaw has been ruled out for the remainder of the Test due to concussion. He was struck on the head while batting and most recently while fielding at forward short leg. If Australia are to bat again in this match, they will be a batsman short.

Australia nevertheless are in a commanding position after centuries from David Warner, Renshaw and Handscomb saw them declare at 538 for 8. Steven Smith had won the toss on Day One and elected to bat first. Australia already have an unassailable 2-0 lead in the series, after securing wins at Brisbane and then at Melbourne. 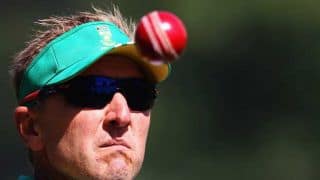