While the target seems a bit far stretched, it seems as though only two results are possible at this stage an Australian win or a draw.

Pakistan will resume Day Five of the third Test at Sydney Cricket Ground (SCG) against on 55 for 1, still 410 runs away from a win against Australia. While the target seems a bit far stretched, it seems as though only two results are possible at this stage an Australian win or a draw. Australia managed to make an opening into the Pakistani batting line up by snaffling the wicket of Sharjeel Khan at the end of Day Four, who scored a quickfire 40. Nathan Lyon sent him packing after Sharjeel blasted his way to 38-ball 40. Australia still have a lot of hard work left in the game following Pakistan s impressive show in the first innings lead by Younis Khan. The likes of Misbah-ul-Haq, Babar Azam and Sarfraz Ahmed are also to follow, who have not made an impact so far on this tour.

Pakistan were bowled out for 315 on Day Four, thereby conceding a huge 223-run lead. Younis played an excellent innings and remained unbeaten on 175. He is now just 36 runs away from becoming the first Pakistan batsman to score 10,000 runs and 12th overall, which is by no stretch of imagination a small achievement. Younis and Yasir Shah put on 51 for the ninth wicket, which took Pakistan s score past 300, but Josh Hazlewood struck twice in three deliveries to bowl Pakistan out. Australia, with a lead of 223 runs, were in the lookout for some quick runs.

That is exactly what they got when David Warner went berserk once again. He slammed the second fastest fifty in Test history and with that, Australia were off to a flying start. He had a new opening partner in Usman Khawaja as Matt Renshaw withdrew from the remainder of the Test due to concussion. Khawaja and Warner put on 71 runs for the first wicket in just 52 deliveries before Wahab Riaz breached the latter s defence. Pakistan were dealt with a blow when they found out their fast bowler Mohammad Aamer could will not take any further part in the match due to a side strain. He has been advised rest for the next three or four days.

Pakistan were one bowler short, and Australia, at no stage, showed any signs of slowing down. Khawaja and skipper Steven Smith added 105 for the second wicket in a little over 16 overs to take Australia close to the 200-run mark. Smith was caught down the leg side off Yasir. Australia continued with their momentum as Peter Handscomb and Khawaja added 67 off just 42 deliveries, after which Australia declared at 241 for 2 and set Pakistan a target of 465. Australia scored 241 for 2 in just 32 overs at 7.5 an over.

Australia did extremely well in the first innings as well as they had declared at 538 for 8 after winning the toss and deciding to bat first. Warner, Renshaw and Handscomb all scored superb centuries.

Pakistan face a tricky situation on Day Five. Do they go for these runs or do they just defend? Would they rather lose the series 2-0 or go down 3-0, in while attempting this world record chase? Azhar Ali and Younis will once again be the key batsmen for Pakistan as they are the two batsmen, who are in good form. They will have to take the initiative to ensure that they get Pakistan the desired result.

Will this be last time we will see Misbah-ul-Haq in Pakistan colours is something that has been lingering on. His hesitation in playing this Test after the crushing defeat at Melbourne, and then a u-turn from retirement, indicated that the end was indeed near. Bbut whether the Pakistan skipper soldiers on for another season will be determined after the Sydney Test. For now, his sole focus will be to prevent Pakistan from losing their sixth consecutive Test something that has never happened before in their history. 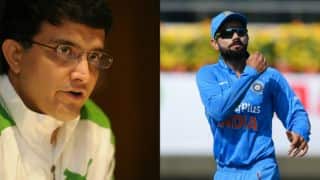