Finch, 31, has scored 4957 runs for Australia in limited-overs cricket without earning a Baggy Green.

Ahead of the announcement of Australia s Test squad for the forthcoming tour of the UAE to play hosts Pakistan, it has emerged that white-ball specialist Aaron Finch is a likely part of the set-up. Australia s selection panel comprising head coach Justin Langer, Greg Chappell and Trevor Hohns are due to unveil the Test squad on Tuesday, but footage from a video shoot has indicated strongly that Finch, the country’s T20I captain and ODI deputy, has been selected.

On his Instagram account three days ago, Finch posted a picture batting in Test whites, in which he said he was filming with Gillette, the new broadcast rights holder.

With Steve Smith and David Warner serving 12-month suspensions and Cameron Bancroft out for nine months, there are three vacant batting spots for the Tests versus Pakistan in October and Finch has been referenced several times over the past few months as a candidate.

The 31-year-old has scored 4957 runs for Australia in limited-overs cricket without earning a Baggy Green, which stands as the record for most international runs scored without playing Test cricket. Last month, former Australia head coach Darren Lehman revealed that Finch had been close to earning a Test call-up when he was at the helm and a member of the selection panel and more recently Langer has spoken of the need to add power to Australia s Test lineup.

Playing T20s for Surrey in England, Finch slammed 589 runs in nine innings at a strike-rate of 182.35, with two centuries and three fifties in the Vitality Blast, the most by and batsman. This is an extension of his terrific white-ball form in 2018, which has seen the Victorian batsman score 900 runs at an average of 69.23 and strike-rate of 132.15 in 17 international appearances for Australia which includes three ODI centuries and a world record 172 and two fifties in T20Is. 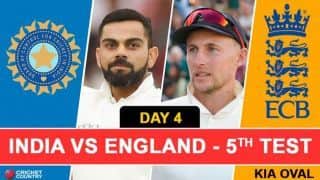 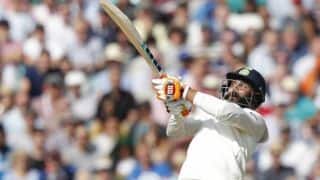