Catch live scores and updates from the second Test between Pakistan and Australia here.

Pakistan and Australia head to the fourth day of the second Test at the Sheikh Zayed Stadium in Abu Dhabi on Sunday. Pakistan finished Day Three on a high with a massive 370-run lead against the Aussies, bowling them out for 261 after declaring their first innings at 570 for six. Pakistan were 61 for the loss of two wickets at the end of the third day, with Azhar Ali and Younis Khan batting on 21 and 16 respectively. Catch Live Scorecard of Pakistan (PAK) vs Australia (AUS) 2nd Test

Australia had another bad day at the office, as they collapsed after scoring just 261 runs. Only Mitchell Marsh and Michael Clarke, were able to display solid resistance against the Pakistani bowlers who flourished on a wicket that was considered superb for batting until yesterday.

Glenn Maxwell played fearlessly and hit some crackalicious shots before being dismissed. Captain Clarke, put up a solid resistance, and was forming a efficient partnership with Mitchell Marsh, when Imran Khan bowled an absolute peach of a delivery to rattle his middle stump. Marsh played some exquisite shots, and gave a good display of his talent and potential as a batsman. He narrowly missed his century, as he was dismissed on 87 . 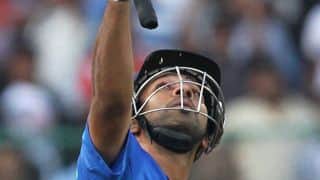 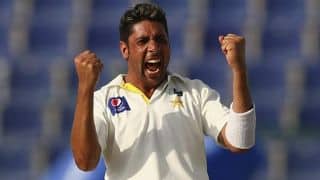