Pakistan vs Australia, Live Cricket Score only T20I at Dubai: Australia win by six wickets with 6 overs to spare

Pakistan vs Australia, Live Cricket Score only T20I at Dubai: Australia win by six wickets with 6 overs to

Catch live scores and ball-by-ball commentary of the Pakistan vs Australia only T20I here.

(Catch live cricket scores and live updates of the match)

PAK 68/7 | Overs 15
S Nasim 24(29), W Riaz 5(9)
James Faulkner comes in to bowl. Wahab Riaz had almost gifted his wicket away trying to go for a non-existent single. Maxwell missed the stumps and he survived. Riaz tries to go for a pull on the fourth one and the top-edge flies fine behind the wicket. Couple more. Seven from the over.
PAK 61/7 | Overs 14
S Nasim 20(26), W Riaz 2(6)
With spinners dominating, Finch gets Steven Smith to bowl his leggies. Gets enough purchase from the wicket to keep a check on the batsmen.
PAK 57/7 | Overs 13
S Nasim 18(23), W Riaz 0(3)
The route to pavilion has seen a lot of traffic in the last hour. Time for Anwar Ali to depart. A nothing shot from him. The ball is turning and yet fetches one that turns further away from him and gives a regulation catch to mid-off. Two wickets for Boyce. Just a single from that over. Wahab Riaz is the new man in.
OUT! A Ali c Richardson b Boyce 5(11)
PAK 56/6 | Overs 12
S Nasim 17(22), A Ali 5(9)
Nasim picks a single and gets the fifty for Pakistan. They have already lost six wickets. Pakistan’s last boundary came fifty balls earlier! Meanwhile, Anwar picks a couple on the fourth ball and was almost caught in the slips next ball. Single on the last ball of the over.
PAK 49/6 | Overs 11
S Nasim 14(19), A Ali 1(6)
Tidy over from leggie Boyce. All three debutants today have got a wicket in their first over. Three singles in that over.
PAK 46/6 | Overs 9
S Nasim 12(17), A Ali 0(2)
After Boyce, it’s debutant Sean Abbott who gets a wicket. Big one for him. Gets the scalp of captain Shahid Afridi. Pitches on the good length and comes back in to him. Afridi isn’t watching it, just goes for a pre-meditated heave on the leg-side. Vociferous appeal and the umpire raises his finger.
OUT! S Afridi lbw Abbott 2(3)
PAK 42/5 | Overs 9
S Nasim 11(15), S Afridi 1(1)
Cameron Boyce is bowling the ideal leg-spinner’s length. Just five singles from the over. These two have a task of resurrecting the innings. But knowing Afridi, it’s never predictable.
PAK 37/5 | Overs 8
S Nasim 7(10), S Afridi 0(0)
This is a sinking ship. Pakistan batsmen are having a brain-freeze situation. Umar Akmal goes after this one from Richardson and it goes high in the air. Warner takes a good catch.
OUT! U Akmal c Warner b Richardson 1(5)
PAK 33/4 | Overs 7
S Nasim 4(7), U Akmal 0(2)
Debutant Cameron Boyce comes in to bowl. Gets good turn but he has bowled short . The moment he moves it further, he gets the reward. Wicket in the first over for the debutant. It looked touch short and Nasim tried to cut it and ended up spooning it to slip. Umar Akmal is the new man in. The last ball of the over, pitched on the leg and spun across the defence of Akmal. Impressive first over from Boyce.
OUT! Shehzad c Finch b Boyce 10(20)
PAK 32/3 | Overs 6
A Shehzad 10(17), S Nasim 3(6)
Starc to Nasim: The debutant is not moving his feet well and just keeps prodding at the away going deliveries. Finally gets one on the pads and clips it away for a single. Midwicket makes a brilliant stop. Shehzad plays out two dot balls.
PAK 31/3 | Overs 5
A Shehzad 10(15), S Nasim 2(2)
Who would have believed that the tour would begin with Maxwell running through Pakistan with his bowling. Maqsood should have been dismissed first ball but Haddin missed an easy stumping on the first ball. But on the third one, Maqsood goes for a big heave and misses the line of the ball. Three wickets for Maxwell. Lots of turn on offer. Five more wides follow. Couple of singles on the last two deliveries.
OUT! S Maqsood b Maxwell 0(3)
PAK 22/2 | Overs 4
A Shehzad 9(14), S Maqsood 0(0)
Frist ball from Starc is pushed to covers by Shehzad for no runs. The next one is down the leg-side and Starc gifts five wides. A dot ball follows. The next one is wide and Shehzad dispatches it a2way for four.
PAK 13/2 | Overs 3
A Shehzad 5(8)
Maxwell has already made a difference without holding the bat. Two wickets in the over. Awais Zia lofted the first ball of that Maxwell high over covers for a couple. On the third ball, Zia gifts his wicket away. A touch short and wide and he hits straight to mid-on. Two dot balls and Umar Amin runs behind Awais as well. Came down the track and misses the line of the ball, Haddin whips off the bails.
OUT! A Zia c Richardson b Maxwell 3(7). U Amin st Haddin b Maxwell 0(3)
PAK 11/0 | Overs 2
A Shehzad 5(8), A Zia 1(4)
Mitchell Starc starts off from the other end and Shehzad plays one back. Shehzad and Haddin have a few words as the batsman came in the way of a throw. He then gets four leg-byes through fine-leg. After a few quiet deliveries, Shehzad chased one outside the off-stump and it went past first-slip for a four.
PAK 3/0 | Over 1
A Shehzad 1(2), A Zia 1(4)
Awais Zia and Ahmed Shehzad walk out with the latter facing. Glenn Maxwell to open the bowling with his off-spin. Shehzad gets a leg-bye first up. Zia gets off the mark off his second ball by playing one to deep cover. Shehzad then gets a single through the leg-side. Zia tries to sweep, but finds the fielder.

Toss: Pakistan have won the toss and have elected to bat first.

Official sell-out in Dubai for this T20. A full house of 25,000 should make a cracking atmosphere at the “Ring Of Fire”! #PAKvAUS

Hello and welcome to CricketCountry’s live blog of the only T20 International between Pakistan and Australia at Dubai. Pakistan will be without their key spinner Saeed Ajmal who is suspended from international cricket after his bowling action was found illegal. Pakistan will also miss the services of Mohammad Hafeez, who has been ruled out of action for two weeks due to a hand injury. Read the preview of the match here

Pakistan will be led by Shahid Afridi, who has been appointed the new captain of the team. Pakistan have included left-arm spinner Raza Hasan to replace Ajmal and also have an exciting leg-spinning allrounder in Saad Nasim who is uncapped at this level.

Meanwhile, Australia too aren’t in a comfortable position. They do have some power-packed players but they will be starting under a new captain in Aaron Finch. Injuries to a few players have disturbed the preparations of Aussies in the run-up to the tour. Mitchell Marsh is all set to miss, Pat Cummins too won’t make it as he was busy with the Champions League T20 2014.

Complete coverage of Pakistan vs Australia in UAE here 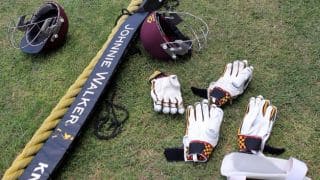 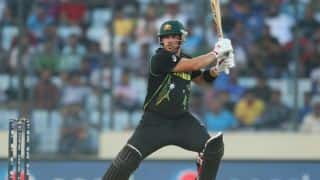 Live Cricket Score: Pakistan vs Australia, only T20I at Dubai