After giving a nail-biting end to the first Test at Brisbane, the expectations were once again high over the second Test between Australia and Pakistan at Melbourne Cricket Ground (MCG). The expectations were surely let down with the interruption caused by persistent rains in the second Test. From three days play, only 184.3 overs have been bowled. More than 80 overs of play has been washed out so far. Despite rains, the match still remains interesting with Azhar Ali s classy knock of unbeaten 205, followed by David Warner s blistering 144. The live cricket streaming of the match will be available online on Hotstar, while the live telecast of the match will be available on Star Sports 2 and Star Sports HD2. In Australia, the live coverage of the game will be available on BT Sport Europe.

The third day of the Test began with Azhar and Mohammad Aamer resuming Pakistan s batting at 310 for 6. Aamer walked back soon and Azhar got a new partner in Sohail Khan, who played excellently. Sohail made run-a-ball 65, including six boundaries and four sixes. His knock not only helped Pakistan in posting a good total, but also helped Azhar scoring his maiden double ton against Australia. Azhar completed this milestone just after Sohail was run out by Nic Maddinson.

Pakistan skipper Misbah-ul-Haq immediately declared the innings after Azhar completed his double century. Azhar remained unbeaten at 205 with the team s score of 443 for 9. In reply, Australia lost their first wicket early in the match in the form of Matt Renshaw, but Warner continued hitting. His stunning batting brought the interest back in contest. His 144-run knock came at a strike-rate of 100.69. Warner departed sixshort of his 150. Besides him, Usman Khawaja scored 95 and remained unbeaten with captain Steven Smith at 10. At the end of third day s play, Australia were well placed at 278 for 2. Looking at the way Australia started their batting, the hosts will not prefer a draw and if weather permits, we can expect a fascinating day s play on Day Four. 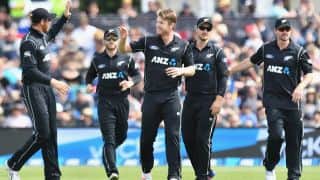