The spinners may come into play at SCG as the pitch is known to be a tad spinner-friendly.

Australia and Pakistan lock horns in the fourth One-Day International (ODI) at Sydney Cricket Ground (SCG) on Sunday. Australia lead the series 2-1, with another match to play after this one. The live cricket streaming of the fourth ODI between Pakistan and Australia will be available online on Hotstar, while the live telecast of the match will be available on Star Sports 2 and Star Sports HD2. In the first ODI at Brisbane, Australia put up 268 for 9, after a brilliant unbeaten ton from Matthew Wade took Australia out of trouble. In reply, Pakistan were bowled out for just 176, handing Australia a whooping 92-run win. James Faulkner with 4 wickets was the pick of the Australian bowlers.

Azhar Ali was injured during this match and as a result, was ruled out of the next two matches. Mohammad Hafeez took over as Pakistan captain in ODIs for the very first time and led his side to a convincing 6-wicket win. Pakistan bundled Australia out for just 220 and then won the match by 6 wickets with 14 balls to spare. Australia took a 2-1 lead in the series after a superb ton from Steven Smith and 82 from debutant Peter Handscomb, helped the hosts register a comfortable 7-wicket win after Pakistan scored 263.

The spinners may come into play at SCG as the pitch is known to be a tad spinner-friendly. As a result, Australia may bring in Adam Zampa and rely on part-timers like Travis Head and Glenn Maxwell turn their arms around. Pakistan have a couple of quality spinners in Imad Wasim and Mohammad Nawaz. Hafeez, too can bowl some useful off-spinners. Pakistan will have to win this match to stay alive in the series. They need as many wins as possible under their belt as an automatic qualification for the ICC World Cup 2019 is on the line.

Australia completed a clean sweep over New Zealand in their previous ODI series and they will travel to New Zealand later this month to battle it out once again for the Chappell-Hadlee trophy. A series win will surely add to their confidence ahead of the ODI series against New Zealand. 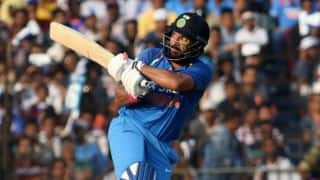