Pakistan vs Australia: Misbah-ul-Haq could opt out of 3rd Test at Sydney

Pakistan vs Australia: Misbah-ul-Haq could opt out of 3rd Test at Sydney

Misbah's team, Pakistan, crumbled on the final day of the rain-affected second test against Australia at the Melbourne Cricket Ground (MCG) on Friday.

Pakistan captain Misbah-ul-Haq says he will need to ‘think’ about his participation in the third and final test against Australia in Sydney next week after questioning his recent contribution to the side. Misbah’s team crumbled on the final day of the rain-affected second test against Australia at the Melbourne Cricket Ground (MCG) on Friday, bowled out for 163 in their second innings to give the hosts an innings and 18-run victory. “I need to think about that,” Misbah told reporters when asked if he would play in the Sydney test starting on Jan. 3. “[If I’m not contributing] there’s no point in hanging around,” added the 42-year-old, who was dismissed for a two-ball duck playing a reckless sweep to off-spinner Nathan Lyon.

On a dismal tour to date, Misbah only scored 11 in the first innings and nine runs in total in the first test in Brisbane. “I haven’t decided about that [Sydney] but let’s see.” Friday’s collapse marked the second time that Pakistan have been bundled out on the final day of a test match on their tour of New Zealand and Australia. They lost nine wickets after tea on the fifth day of the second test against New Zealand in Hamilton last month to lose by 138 runs and the two-match series 2-0.

Misbah, however, missed that game at Seddon Park due to the death of his father in law, though he would have missed the match anyway as he had been suspended for a slow over rate. 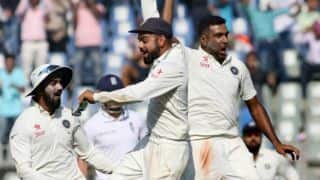