Pakistan are in trouble early in the only T20 International against Australia at the Dubai International Cricket Stadium. They have lost Awais Zia, Sohaib Maqsood and Umar Amin early and all the wickets fell to Glenn Maxwell. Zia was caught at mid-wicket, Amin was stumped in the third over and then Maqsood was bowled by Maxwell in the fifth over.

This is after Pakistan won the toss and chose to bat. Shahid Afridi is the new captain for them and Aaron Finch is leading Australia. The decision to bowl Glenn Maxwell was a brave won and so far it has worked wonders. In five overs, Pakistan are 31 for three. Ahmed Shehzad is in the middle and debutant Saad Nasim is batting with him. Out of the 31 runs, 16 have been extras. 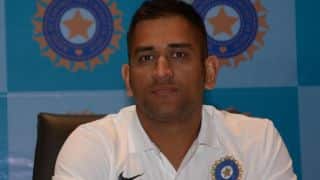