The Australian bowlers were made to toil hard on Sunday.

Mitchell Starc is really feeling the heat in Dubai. The Australian pacer sent a scare through the dugout when he went down with late cramps on Day 1 of the first Test against Pakistan. However, Starc was back on his feet on the second day when he took the ball in the second over on Monday and bowled five overs.

Starc, who is so far wicketless in the first Test, said that pickle juice provided by team-mate Travis Head helped to calm down the pain. “There was a lot of pickle juice,” Starc told Sydney Morning Herald on Monday.

“Travis Head looked after me. He had a couple of bottles in his pocket for me. It’s only come in in recent times I think but it’s supposed to help stop the cramps coming on.

“Unfortunately, they were already coming on for me so it was trying to [shorten] it a little bit. Cramps in both the calves and the groins wasn’t fun but a good night’s sleep and some rest and hopefully some wickets this morning.”

The Australian bowlers were made to toil hard on Sunday and only managed to claim wickets after tea with off-spinner Nathan Lyon dismissing opener Imam-ul-Haq after he registered his career best 76.

Pakistan resumed their second day at 255/3 and were 329/4 at lunch after Peter Siddle rattled Mohammad Abbas s woodwork. 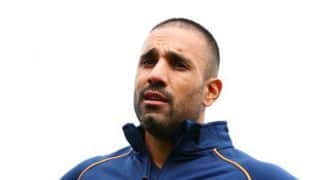