Steven Smith has yet to finalise his team and hasn't ruled out playing with four pacemen at the expense of spinner Nathan Lyon, but he is promising the tourists a work-out on the bouncy Gabba pitch.

Skipper Steven Smith says Australia’s pace attack will test the resolve of Pakistan batsmen with short-pitched bowling in Brisbane’s first ever day-night Test from Thursday. Smith has yet to finalise his team and hasn’t ruled out playing with four pacemen at the expense of spinner Nathan Lyon, but he is promising the tourists a work-out on the bouncy Gabba pitch. With in-form quicks Mitchell Starc and Josh Hazlewood armed with the new ball, Smith said team strategists had watched Pakistan’s recent series in New Zealand where the tourists slumped to two hefty defeats. “I think traditionally sub-continent sides don’t handle the pace and bounce in Australian conditions,” Smith said Wednesday, ahead of the three-Test series.

“So you need to try and find ways to exploit that as much as possible and at times I’m sure we’re going to see some short-pitched bowling to mess with their feet to find ways to get them out. New Zealand obviously did a good job, so hopefully our bowlers can replicate that.” Smith was far more upbeat about Australia’s chances after stopping the rot of five straight Test defeats with a revamped team in Adelaide late last month. “It’s been a nice turnaround. We’ve won four games on the trot (including three ODIs against New Zealand) as an Australian team now and hopefully we can keep that winning momentum going,” he said.

Pakistan also have fast bowling ammunition to return fire at the Gabba, led by Mohammad Amir and Wahab Riaz. Smith pinpointed Amir as a potential “handful”. “He’s a quality bowler. He’s got some great skills. He bowls with really good pace and can swing the ball,” he said. “It’s great to have those sort of gears and those skills so no doubt he could potentially be a handful if it’s swinging around.” But Smith also warned Pakistan’s leg-spinner Yasir Shah to make sure his length was on the mark or the Australian batsmen would take to him. Yasir has captured 116 wickets in just 20 Tests since his debut against Australia in Dubai two years ago.

“I guess the extra bounce can play in your favour as a spin bowler at the Gabba, but it can also play against you,” Smith said. “Your length has to be spot on, generally there isn’t too much turn — it’s more bounce, so length is crucial. And if you’re slightly off your length, you can really cash in down the wicket and square of the wicket as well.” Smith added that rookie opener Matt Renshaw, who made his Test debut against South Africa in Adelaide this month, was adapting to his new environment. “He’s coming out of his shell in the last couple of days. I was impressed with the way he played last week and been impressed with the way that he trains.

“He’s got beautiful hands in the slips cordon, the practice that we’ve done and the way that the ball goes into his hands is beautiful. I’ve been really impressed with that and hopefully he can have a really nice week at his home ground.” Gabba curator Kevin Mitchell said he would be surprised if the first pink-ball Test in Brisbane lasted five days.”I think probably bat first, given the conditions,” Mitchell said. 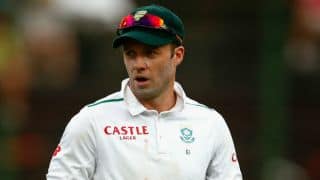 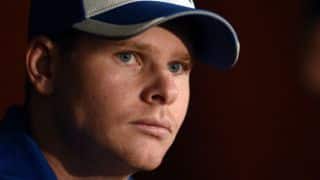