Pakistan take on Bangladesh in their first match of the ICC World T20 2016 tournament, at the iconic Eden Gardens on Wednesday.

Pakistan take on Bangladesh in their first match of the ICC World T20 2016 tournament, at the iconic Eden Gardens on Wednesday. The match will be the 14th game of the tournament, which had a Round 1 qualification process through which the Bangladeshi side made it to the Super-10. This will be the second game in the Super-10 round, with India and New Zealand clashing on Tuesday night at Nagpur in the first match. Bangladesh and Pakistan have faced off recently in the Asia Cup 2016 match, in which Shahid Afridi’s men were out-mastered by spirited Bangladeshi team in their backyard. Live Cricket Scorecard: Pakistan vs Bangladesh,14th T20 Match, Super 10 Group 2, ICC T20 World Cup 2016

Pakistan have been through tough time, as their defeats to India and Bangladesh was enough for critics to write them off as favourites for the T20 World Cup 2016. Pakistan have been struggling in almost all departments, and their batsmen have caused them too much troubles with their failures and inconsistent performances. ALSO READ – Pakistan vs Bangladesh, T20 World Cup 2016 Match 14 at Kolkata: Bangladesh’s likely XI

On the other hand, after India, Bangladesh have one of the most lethal top three batsmen. Tamim Iqbal and Soumya Sarkar will open the innings while Sabbir Rahman, who was very impressive in the Asia Cup T20 2016 tournament, will be posing threats to a talented Pakistani bowling attack, that has the likes of Mohammad Aamer, Mohammad Irfan and Wahab Riaz. Live Cricket Score Pakistan vs Bangladesh, T20 World Cup 2016 PAK vs BAN, 14th T20 Match at Kolkata

There is no confirmed information on Mustafizur Rahman, as the bowler has remained away from action ever since he suffered injury in the Asia Cup. Bangladesh will be bolstered if Mustafizur plays in the game on Wednesday afternoon. 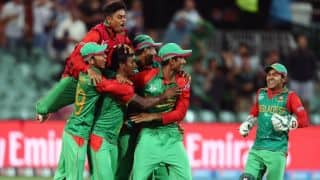 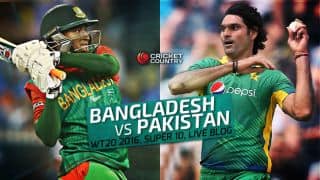