Pakistan were in a commanding position after stumps on Day 1 against England at Lord’s. Asked to bowl, Mohammad Abbas and Hasan Ali ran past England line up and bundled the home side for 184. In response, Pakistan are 50 for 1, trailing England by 134 runs. The live cricket streaming of the match will be available on Sony LIV, while the live telecast of the match will be available on Sony SIX, Sony Six HD. In England the live telecast would be available on Sky Sports, and streaming Sky Go. You can also follow CricketCountry s LIVE SCORECARD HERE.

Abbas and Ali claimed 8 wickets between them to rattle England’s formidable lineup. Only Alastair Cook managed to defy odds. He went to score his 56th Test fifty in the process. He was supported by Ben Stokes (38) and Jonny Bairstow (27).

England managed to pick Imam-ul-Haq’s wicket early, as Stuart Broad claimed his 411th Test victim. Azhar Ali and Haris Sohail stood fort for the visitors’ taking them to 50 for 1 at stumps. 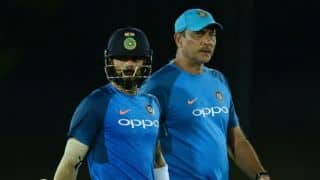