England are leading the five-ODI series by 1-0 as they won the first ODI at The Rose Bowl, Southampton by 44 runs (D/L method).

Imad Wasim scored a valiant fifty in the 2nd One-Day International (ODI) versus England at Lord’s. He stitched an important partnership with Sarfraz Ahmed, who top-scored with an amazing hundred, and added 77 runs for the sixth wicket with the wicketkeeper-batsman. After the departure of the centurion, he took guard and went onto add vital runs with the lower-order to take his tam’s total to 251 all-out in 50 overs. Pakistan came back in the match after their top-order were struggling at 2 for 3. Their top three players were clueless against the seam bowling of Chris Woakes and Mark Wood but recovered well in a pitch which was doing a lot for the bowlers. FULL CRICKET SCORECARD: Pakistan vs England 2016, 2nd ODI at Lord’s

Sarfraz looked in complete control at the crease since the beginning as he moved around the pitch to disturb the line and length of the bowlers and respected the good balls. His first hundred came in the ICC Cricket World Cup 2015, held in Australia and New Zealand, when he got a vital ton against Ireland in their last encounter from the group stages. Sarfraz has again stood tall for his side when the chips were down in a surface doing lots for the bowlers. He was wel supported by Babar Azam and Shoaib Malik with whom he added 64 and 59 runs, respectively, to stitch a comeback for his side. ALSO READ: Sarfraz’s hundred takes PAK to 252 in 2nd ODI vs ENG

Wasim took charge after his dismissal and played his shots to add valuable runs and help his side cross the 250-run mark. England are leading the five-ODI series by 1-0 as they won the first ODI at The Rose Bowl, Southampton by 44 runs (D/L method). 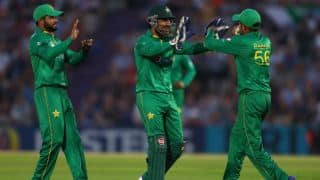 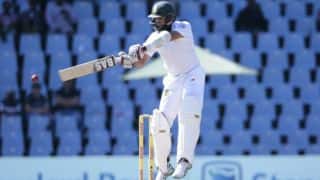