Pakistan vs Ireland, 1st Test, Day 4 2018 Live Streaming, Live Coverage on Sony SIX: When and Where to Wat

Pakistan are 10 wickets away from clinching an innings defeat win in the one-off Test against Ireland. All said and done, Ireland batsmen were no match for Pakistan’s skilled bowling. They were bundled out for 130 in their first chasing, after Pakistan declared on 310 for 9 on Day Three. The live cricket streaming of the match will be available on Sony LIV, while the live telecast will be available on Sony Six and Sony SIX HD in India.

Hosts’ came out for their second innings trailing by 180 and they now have reduced 64 from it without losing a wicket. The two openers – William Porterfield and Ed Joyce – rode their luck along and have battled it out there. However, their job is not yet done as the two need to carry along and do the bulk of the scoring tomorrow. Pakistan will be hoping for Mohammad Abbas and Shabad Khan to pick early wickets on Day Four. 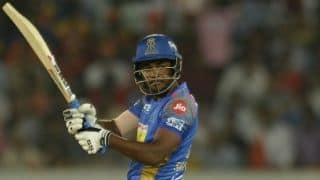 Shane Warne: Sanju Samson could be India’s next superstar