It was Sharjeel's maiden ODI century as well and it did help Pakistan's cause, as they eased to a 255-run victory over the hosts. Ireland were all out for 82.

Sharjeel Khan on Thursday became the third fastest to reach the 150-run mark in an innings, when he reached there off just 85 balls. A fantastic knock of 152, comprising of 16 fours and 9 sixes, Sharjeel’s innings took his team to a mammoth total of 337/6 in a match that was reduced to 47 overs per side. Only South Africa’s AB de Villiers and Australia’s Shane Watson have reached the landmark quicker than the Pakistan opening batsman and although Sharjeel was out next ball, caught behind off Barry McCarthy, he had set his side up for a huge total. FULL CRICKET SCORECARD: Pakistan vs Ireland,1st ODI at The Village, Malahide, Dublin

What made the 27-year-old Sharjeel’s feat all the more impressive was that Thursday’s match was just his 12th ODI, with his previous highest score 61. READ: Sharjeel Khan, Imad Wasim lead Pakistan to 255-run win over Ireland

It was Sharjeel’s maiden ODI century as well and it did help Pakistan’s cause, as they eased to a 255-run victory over the hosts. Ireland were all out for 82. Umar Gul, returning to the ODI side, claimed figures of 3 for 23. Mohammad Aamer took a wicket as well. But Imad Wasim, the left-arm spinner, bagged a five wicket haul, his first in international cricket. His figures were 5 for 14 as he put in a stunning bowling display, picking up 3 wickets in 4 balls to end the proceedings in Pakistan’s favor.

Pakistan’s victory was the seventh largest victory, in terms of runs, in the 3,767 match history of one-day internationals. The two-match series will conclude at Malahide on Saturday. Pakistan for now lead 1-0. They had rested leg-spinner Yasir Shah and left-arm seamer Wahab Riaz for the first ODI. 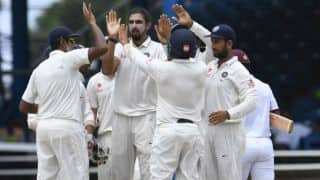 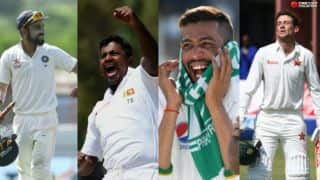