Pakistan vs New Zealand, 1st T20I at Dubai: New Zealand 61 for 4 after 10 overs
By CricketCountry Staff

New Zealand lost their fourth wicket as Martin Guptill who was looking good for a big score was dismissed by the Pakistan captain Shahid Afridi which brought Luke Ronchi to the crease. Guptill partnered with Anderson and did the repair work after New Zealand lost three early wickets. New Zealand were 61 for four after 10 overs.

Earlier, Mohammad Irfan who came on to bowl the third over picked the third New Zealand wicket. Irfan sprayed in a short delivery which caught Taylor’s top edge and went towards the point fielder who took it comfortably. Three bowlers came on to bowl the first three overs for Pakistan and all of the managed to pick a wicket each. New Zealand were reduced to 20 for three after four overs. Anwar Ali struck early and dismissed Kane Williamson on the very first ball he faced putting New Zealand in a troublesome position. Ali darted a delivery on the middle stump and Williamson failed to get any bat on it. Anton Devich replaced Williamson on the crease. Sohail Tanvir who came on to bowl the second over was hit for a monstrous six over deep mid-wicket by Guptill with the ball landing almost 20 rows back. But making an incredible comeback, Tanvir dismissed Devcich only for one on the last ball of the second over.

Pakistan won the toss and elected to bowl first. Umar Gul and Wahab Riaz who were expected to make a comeback into the T20I squad was left out from the line-up. Pakistan vs New Zealand, 1st T20I at Dubai: Ross Taylor out for 4 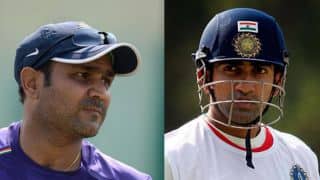