New Zealand lost two quick wickets after the tea interval. Centurion Tom Latham was out leg-before to Rahat Ali for 103 while Mark Craig was run out for one run after a horrible mix-up. Tim Southee was caught behind for a duck.

McCullum, who looked uncertain during his short stay, fell to the crafty left-arm spinner Zulfiqar Babar while trying to defend one that was spinning away. He only succeeded in edging the ball to first slip Younis Khan who took a good low catch.

In the end it was a stern test for the New Zealand batsmen. The Pakistani bowlers both pacers and spinners had the batsmen in a great deal of discomfort at all times. There were numerous appeals for for leg-before and caught behind at all times. It was truly an acid test for New Zealand. 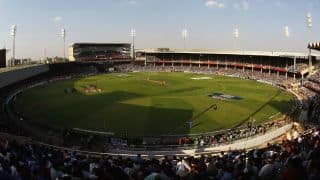