Pakistan declared with a lead of 479 against New Zealand.

Pakistan declared their second innings at 175 for two with a lead of 479 on Day 4 of the opening Test at Abu Dhabi on Wednesday. Mohammad Hafeez top-scored with 100 not out. He had good support from Younis Khan who made . Before that he shared a 69-run opening stand with Azhar Ali. This is the fifth consecutive time Pakistan  have declared the innings. England hold the record after doing this on six occasions.

This was a very fluent knock by Hafeez  He stroked the ball beautifully. To add to this he had been very positive, whenever the bad ball came his way he put it away.  Hafeez would be looking to convert this into a hundred. In the first innings he fell four short of well-deserved ton.

The all-rounder employed the drive and the cut a fair bit. It also points to the fact  that he was given room at times. One particular shot of his was a beautiful cover drive of Boult.  Hafeez was often given room throughout the Pakistan innings. Tim Southee, Trent Boult and Ish Sodhi were guilty of this

Younis Khan during his knock of 28 timed the ball well before he was trapped leg-before by Ish Sodhi. On an earlier occasion Ish Sodhi had him out leg-before nearly, the umpire had adjudged him out but Younis chose to review it and survived. He had hit the ball.

The left-arm seamer  Boult started off proceedings for the New Zealanders. He bowled a consistent line and length although he occasionally gave some width outside the off-stump which Hafeez cashed in on.

New Zealand who have a mountain to climb did try their best to contain the Pakistani line-up. For them though they have to find a way to save this Test match. They’ll need to show a lot of determination to do so. 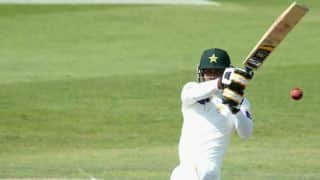 Barber makes his move against Brearley