The skipper added that he has opened before and had some success in the sub-continent.

New Zealand captain Brendon McCullum‘s opener days are back as he would reportedly open the batting in Test cricket again this week. McCullum will open with county club Canterbury’s Tom Latham in the first Test against Pakistan that is underway in Abu Dhabi. The hosts opted to bat after winning the toss on Friday.

Hamish Rutherford misses out, with McCullum’s move to the top allowing New Zealand to field six genuine bowling options, including two spinners, in the United Arab Emirates, News.com.au reported. Ish Sodhi and Mark Craig are both playing in the spin-friendly conditions, and McCullum’s shift up from number five means there is room for all-rounders Corey Anderson and Jimmy Neesham.

Anderson is likely to bat at number five, with Neesham at six and BJ Watling at seven. McCullum’s last stint as a regular test opener ended almost two years ago and since then he has blossomed at the fifth position, averaging more than 45 including a triple-century last season against India. McCullum said that this is a horses-for-courses type approach, adding that for them to be able to have the extra bowling option, it was the best option New Zealand had available.

The skipper added that he has opened before and had some success in the sub-continent. He said that one does what’s required to give the side the best chance of winning. McCullum also said, ahead of the match, that he is looking forward to batting with Latham as well, adding that he’s an exciting young talent who’s very measured at the crease. 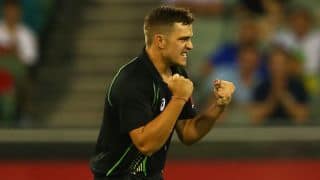