Pace bowler Kyle Mills will take no further part in New Zealand‘s one-day series against Pakistan after injuring his groin in training, the team said Saturday. “Mills will return home from the tour of the United Arab Emirates, after suffering a right groin strain during practice on Thursday,” New Zealand Cricket said in a statement.

The 34-year-old sustained the injury while bowling in the nets ahead of the second one-day international against Pakistan at Sharjah. A timeline for Mills’ return to action is not yet known but he will fly home to New Zealand for further assessment and treatment, the statement said. No decision has yet been made on a replacement for the injured player.

Mills featured in the second Twenty20 against Pakistan and took 3-26 as New Zealand levelled the two-match series at 1-1. He then managed just one wicket for 54 runs in the tourists’ defeat in the first one-day international in Dubai on Monday.

Pakistan and New Zealand are currently locked at 1-1 in the five-match one-day series. Pakistan won the first match by three wickets, while New Zealand clinched the second by four wickets in Sharjah on Friday. Mills now faces a race against time to regain full fitness for New Zealand’s two-Test home series against Sri Lanka starting in Christchurch on Boxing Day.

The teams will also play seven one-day internationals as part of the tour. 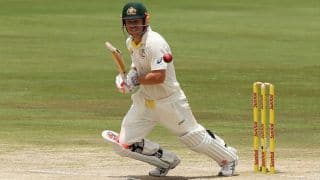