Afridi decided to go for a lbw review on the delivery in which NZ hit the winning runs.

New Zealand needed a solitary run. They had 25 balls in hand as Haris Sohail ran in, around the wicket, to bowl to Daniel Vettori; the ball was on the off-stump, and Vettori reverse-swept the ball for four. Or so it seemed.

As the players started to leave the ground, they stopped, as did the crowd. Shahid Afridi did something only he could — gone for the DRS after the winning hit took place.

Richard Illingworth referred to Joel Wilson, the third umpire. It was evident from the initial replays that the ball had missed the bat and had hit the pad instead. Eventually Hawk-Eye revealed that it would have missed off-stump; Vettori’s runs were converted to leg-byes; and that was that. 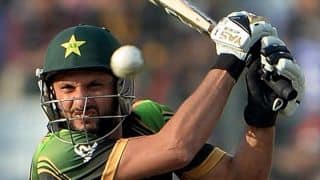