The second day has clearly belonged to New Zealand so far, with NZ scoring 164 runs in a single session.

New Zealand were in the driver’s seat at the end of the second session of the second day of the third and final Test against Pakistan at Sharjah. The Kiwis reached a score of 164 for the loss of one wicket, with Brendon McCullum posting the fastest Test century by a New Zealand batsman off just 78 balls, and Kane Williamson nearing his 14th fifty, scoring 44 runs from 43 balls. The Pakistan bowlers were given quite some rough treatment especially by McCullum, with Mohammad Talha conceding 62 runs from seven overs. Rahat Ali emerged the only wicket taker for the Pakistanis, removing opener Tom Latham for a score of 13 from 32 balls.

New Zealand started the session from a score of seven for no loss, with McCullum batting on six. The New Zealand leader soon began to attack the Pakistan bowlers at free will, taking his side to a 50-run opening stand in no time at all. It was right after the partnership milestone was achieved when Pakistan managed to get the breakthrough, with Tom Latham getting a top-edge off the bowling of Rahat Ali and Sarfraz Ahmed taking a running catch over at the square-leg area.

That was the only time the Pakistanis would be celebrating for the rest of the session, as Brendon McCullum seemed to get more vicious with each passing delivery. McCullum took a particular liking for Zulfiqar Babar and Mohammad Talha, scoring 16 and 18 runs off one of their overs respectively. Kane Williamson silently supported his partner from the other end, occasionally sending the ball towards the boundary. The highlight of the session was McCullum reaching the batting milestone off the last ball of the session, with McCullum taking a single off the last ball. He reached his century in 78 balls, beating Ross Taylor’s record [81 deliveries] in the process.

Among the bowlers, Rahat Ali was the only bowler to take a wicket and conceding 21 runs. Talha was particularly expensive in his approach, conceding 62 runs off just seven overs at an economy of  nearly nine.

New Zealand resumed from their score of seven for no loss after one over after lunch . Brendon McCullum scored the runs for New Zealand, batting on a score of six. Pakistan were earlier dismissed for a score of 351, with Mohammad Hafeez top-scoring for the hosts with a score of 197. Mark Craig was the pick among the New Zealand bowlers with figures of seven for 94, the third instance of a New Zealand spinner taking seven or more wickets. 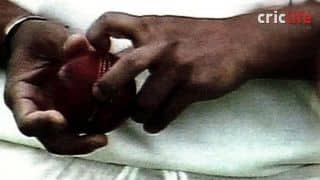