The visitors lasted 13 overs in the first session, amassing a lead of 339.

New Zealand were dismissed on a score of 690 from 143.1 overs during the first session of Day four of the third and final Test against Pakistan at Sharjah, with Ish Sodhi being the last batsman to be dismissed when he was caught at the slips by Younis Khan off the bowling of Yasir Shah on a score of 22. New Zealand not only managed to amass a lead of 339, but surpass their highest Test score of 680, which they brought up against India earlier this year.

New Zealand began the day by resuming from their overnight score of 637 for eight, with Mark Craig and Sodhi batting on scores of 34 and zero respectively. Craig brought up his second Test half-century in no time, hitting a six off the bowling of Yasir. During the 141st over, which was bowled by Mohammad Hafeez, Craig smashed a six over long-off, before taking a single to bring up New Zealand’s highest score ever. Craig ended up getting dismissed in the same over however.

Sodhi tried to continue the run-fest for a little more time, hitting Hafeez for a six over long-on, which broke New Zealand’s record for most boundaries in an innings. A total of 700 was looking near for the Kiwis when Yasir Shah struck for the fourth time in the innings, with Sodhi getting caught at the slips by Younis Khan to depart on a score of 22 from 43.

Rahat Ali and Yasir Shah were the pick of the bowlers during the innings, taking four wickets apiece while conceding 99 and 193 runs respectively. This was also the second-highest total ever conceded by Pakistan against all opposition in Test cricket.

New Zealand began the day by resuming from their overnight score of 637 for eight, with Craig and Ish Sodhi batting on scores of 34 and zero respectively. Earlier in the third day, Brendon McCullum was dismissed after bringing up his fourth career double-century, the fourth-fastest of all time as well. Kane Williamson narrowly missed out on a well-deserved maiden Test double-century. Ross Taylor, Corey Anderson and Tim Southee were dismissed on the exact score of 50, walking back to the pavilion almost immediately after reaching the mark. 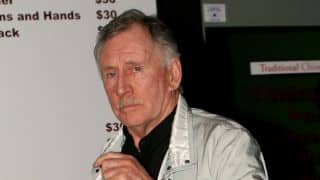 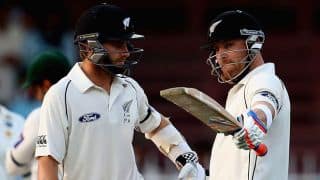 Pakistan vs New Zealand 2014: Highest run rates for a team that has batted 100 overs