Pakistan were earlier dismissed for 351, with Mark Craig registering figures of 7/94.

New Zealand finished at a score of seven for no loss after one over at lunch on the second day of the third and final Test against Pakistan at Sharjah. Brendon McCullum scored the runs for New Zealand, batting on a score of six. Pakistan were earlier dismissed for a score of 351, with Mohammad Hafeez top-scoring for the hosts with a score of 197. Mark Craig was the pick among the New Zealand bowlers with figures of seven for 94, the third instance of a New Zealand spinner taking seven or more wickets.

The day began on a sombre note, with the players from both sides observing a minute’s silence for the late cricketer Phillip Hughes, who died on Thursday morning at St. Vincent’s hospital at Sydney, losing the battle for his life after getting struck by a bouncer behind his ear during a Sheffield Shield game between South Australia and New South Wales on November 25. The players also wore black armbands in his memory, and the New Zealand players bore the initials ‘P.H.’ under the fern logo on their jerserys. The players from both teams also placed their bats on the boundary with cap on each on them.

The first casualty of the day for Pakistan came in no time at all, with skipper Misbah-ul-Haq falling for off the bowling of Tim Southee without adding to his overnight score. There were no celebrations by the New Zealanders on the fall of the wicket though, who were clearly distraught by Thursday’s incidents. Hafeez kept the runs coming, scoring a couple of boundaries and looking set to bring up his maiden Test double century. ‘Professor’, as he is affectionately called, took a single to surpass his previous best score of 196, which was scored against Sri Lanka in 2012. He was unfortunately dismissed on 197, when he tried to smash Ish Sodhi for a six, but was caught by Trent Boult at the deep square leg boundary. His dismissal is the ninth instance of a Pakistan batsman falling in the 190s.

Hafeez’s dismissal was the beginning of the downslide that the Pakistan middle-order was to experience as Mark Craig cleaned the remaining batsmen with ease. It was a disappointement for Asad Shafiq and Sarfraz Ahmed getting dismissed for 11 and 15 respectively, in stark contrast to their recent forms which saw them prosper with the bat. Yasir Shah was the only member of the lower order to offer any resistance, hitting four boundaries to score 25 runs from 65 balls. Shah was the last batsman dismissed, with Pakistan folding for a score of 351. New Zealand played one over before the umpires called for lunch, with Brendon McCullum getting a boundary in the over. 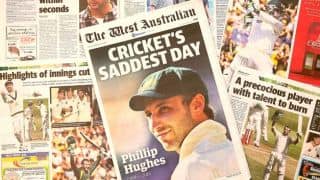 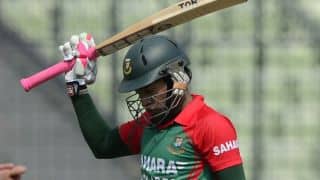