Mohammad Hafeez struck a fluent 123 not out, while Daniel Vettori managed to take his first wicket in 2 years.

Pakistan finished at a score of 186 for the loss of three wickets at the end of the second session of play on the first day of the first Test against New Zealand at Sharjah on Wednesday. Mohammad Hafeez and Misbah-ul-Haq were batting on scores of 123 and four respectively, with the former scoring his second consecutive and seventh overall Test century. Mark Craig remained the leading New Zealand bowler with figures of  two for 44, with Daniel Vettori taking the other wicket after conceding 27 runs. Though they lost two wickets since the start of the second session, they are fairly comfortably positioned at the moment.

Pakistan resumed from a score of 82 for one after lunch, with Hafeez a big hit away from his half century and Azhar Ali as his companion. After a couple of quiet overs, the duo began to attack the opposition, with Hafeez hitting a majority of the fours as well as a six. The two were well-settled at the crease with the scoreboard reading 131 for one, when Craig struck again, this time removing Ali, before the latter could reach his half-century. It was not long before Hafeez reached his milestone, with cheers resonating around the Sharjah International Cricket Stadium.

Hafeez’s century celebrations had barely died when Daniel Vettori decided to announce his return to the Test cricket fold by removing Younis Khan. Younis, who had enjoyed a great form of batting in the recent home series against Australia and New Zealand, could not make much of a difference in this match as he was dismissed for a score of five from 13 balls. This was Vettori’s first Test wicket in two years, and his 361st overall.

Pakistan earlier won the toss, their second such success in the current series, and elected to bat. Hafeez was brought in place of a struggling Taufeeq Umar, while Ehsan Adil was replaced by Mohammad Talha. New Zealand made the only change of bringing veteran spinner Daniel Vettori in place of James Neesham. New Zealand gave a guard-of-honour for Daniel Vettori at the start of the Pakistan innings. Vettori was back in the Test squad after a gap of nearly two-and-a-half years. having played his last Test against West Indies in the summer of 2012.

The first ball of the match was smashed for a boundary off Hafeez’s bat, which he repeated off the very next over as well. The bowling was handled initially by Trent Boult and Tim Southee, before Vettori was brought in to the attack in the 10th over, replacing Southee in the process. Hafeez did not get into the emotions of Vettori’s return, smashing the veteran for a six at the end of the 12th over. The opening partnership could not reach the 50-run mark, as Shan Masood was dismissed off the bowling of Mark Craig in the 17th over, with 44 runs on the board. 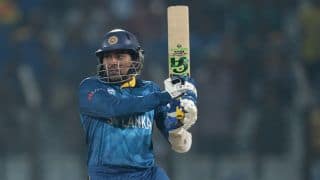