The PCB said the match gate money will go to the families of the dead and for the rebuilding of the school.

Pakistan cricket officials decided to go ahead with Wednesday’s fourth day-night international against New Zealand in Abu Dhabi despite calls to postpone it for a day after the carnage in Peshawar. The Taliban attacks on an army-run school in Peshawar on Tuesday left 141 dead, 132 of them school children. The Pakistan Cricket Board (PCB) said it cannot postpone the one-day international due to broadcast commitments.

“We tried our best to postpone the 4th ODI but were constrained by the Broadcasters commitment as well as for cricketing reasons advised by the New Zealand management”, said a PCB release.  “We are playing outside Pakistan only because of the threat of terrorism at home. If we allow terrorists to disrupt our matches abroad, then all will be lost,” said PCB.

Pakistan have been were forced to play their home series on neutral venues in the United Arab Emirates following the terrorist attacks on the Sri Lankan team bus in Lahore in March 2009.

The PCB said players will mourn the Peshawar tragedy. “So we have decided to go ahead with the match and our players will wear black armbands in grief and observe a minute’s silence and flags will be lowered.” The PCB said the match gate money will go to the families of the dead and for the rebuilding of the school. 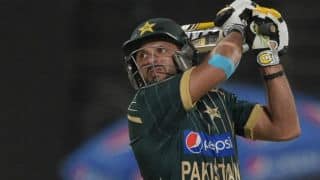 N Srinivasan to Supreme Court: Ganguly, Gavaskar, Shastri too have conflicts of interest