Pakistan vs New Zealand 2014: ODI series win will be major boost for hosts ahead of World Cup, feels Waqar Younis

Pakistan vs New Zealand 2014: ODI series win will be major boost for hosts ahead of World Cup, feels Waqar

The five-match ODI series between Pak and NZ is currently level at 2-2.

Pakistan coach Waqar Younis feels a win in the fifth and final One-Day International (ODI) against New Zealand in Abu Dhabi on Friday will give his team a boost for next year’s World Cup.

New Zealand levelled the five-match series 2-2 with a narrow seven-run win in Abu Dhabi on Wednesday, setting up an intriguing finale to the tour after the preceding three-match Test and two-Twenty20 series were shared 1-1.

Waqar said the series would give Pakistan an idea on where they stand before World Cup to be co-hosted by Australia and New Zealand in the months of February and March.

“We need to win the final one-day,” said Waqar on Thursday.

“This series is for us to utilise and get the clear picture who are the final 15 (players for the World Cup) and besides that win this series.”

“Younis’s form was very important, he has shown us his true potential,” said Waqar of the 37-year-old batsman whose 103 went in vain as Pakistan fell seven short when chasing a challenging 300-run target.

Waqar blamed poor fielding. “Honestly, we lost the match because of the fielding, we gave away some 20-25 runs in the field and that is a worrying sign for me,” said Waqar, who praised the fighting spirit of his team, taking the match to the final over.

“I am happy at the fight, the expectations we had with our batting were fulfilled and we maintained a nine plus average, unfortunately we couldn’t finish that but the fight pleased me.”

Williamson said good partnerships built his team’s total. “It was just about executing the plans we had, and just trying to build partnerships and it was great to come back with the ball in the second part of the Pakistan innings,” said Williamson.

“Pakistan kept coming, they showed consistently how good they are. To have 300 on the board on a wicket that was tiring, they pushed us and it was nice to pick up some timely wickets at the end and close it out.”

Williamson hoped his team improves further on Friday. “It’s nice to bounce back,” said Williamson, whose team also won the second match in Sharjah to level the series 1-1.

Pakistan won the first and third matches. “It was a much improved performance (on Wednesday) and there is much we want to improve on and I am sure we do it in the last match.” 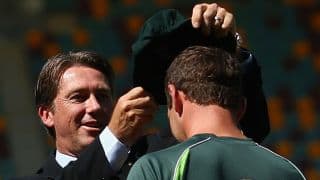