The inclusion in the ODI squad for the ODI series vs NZ has raised Younis' World Cup hopes.

Veteran Pakistan batsman Younis Khan on Sunday expressed his delight at being recalled to the One-Day International (ODI) team which raised hopes of a final campaign in next year’s World Cup, which is co-hosted by Australia and New Zealand.

The 37-year-old was recalled to the one-day squad, as well as the 30-man World Cup preliminary squad, after scoring four scintillating centuries in the Test series against both Australia and New Zealand since October.

Younis hoped he would justify his recall in the five-match one-day series against New Zealand starting in Dubai on Monday. “I am a happy man to be back,” said Younis, who played just one limited over game in August this year after a 17-month hiatus due to lack of form.

“I hope I do well in this series and then the World Cup, it is very important,” said Younis, who has not scored an ODI hundred for six years.
Younis hoped Pakistan would defeat New Zealand in the the ODI series after both the preceding Tests and Twenty20 series finished all square at 1-1.

“We don’t want to share this one-dayers. I hope Pakistan will do well in the one-dayers. We have fantastic players in one-dayers. Everyone saw what happened in the T20s. In 50-over cricket, we have some fantastic players, who I think will perform well for Pakistan,” said Younis.
Younis added he would like to bat at number three.

“My position in one-day cricket has changed since the time I started playing international cricket. I am always happy if I am able to bat higher up in the order to contribute to a Pakistan win,” said Younis.

Younis was pleased that Pakistan’s recent wins were due to good batting. “In the past we have had legendary bowlers in the Pakistan line-up, who were match-winners. It is on very rare occasion that batting has won you matches, it has mostly been the bowling which has made the difference,” he said.

Younis felt Pakistan could lift only their second World Cup trophy, having won it in 1992 in Australia. “We have a good chance in the World Cup, because we have players in our side who can do well there,” said Younis.

“It is often said that sub-continent sides don’t do well on pitches with bounce. But if you look at the Pakistan side we went to South Africa and beat them there in a one-day series [last year]. So that’s the reason I believe we have a very good chance in the upcoming one-dayer series and especially during the World Cup.” 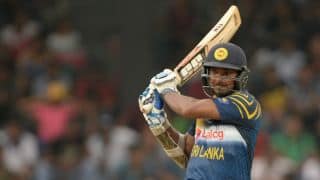