The free live cricket streaming of the Pakistan vs New Zealand 3rd T20I can be accessed at PTV Sports, for the Pakistani users.

The free live cricket streaming of the Pakistan vs New Zealand 3rd T20I can be accessed at PTV Sports, for the Pakistani users. The live cricket streaming of the Pak vs NZ 3rd T20I is also available on Sky Sport. Pakistan take on New Zealand in the third and final Twenty20 International (T20I), at the Westpac Stadium in Wellington on Friday. The three-match T20I series is currently levelled at 1-1 after both the sides registered victories in the earlier two matches. While Pakistan made a surprising start by winning the first T20I by 16 runs at Auckland’s Eden Park, the New Zealand side under the leadership of Kane Williamson bounced back in style in the next match to slam Pakistan by 10 wickets. Williamson and Martin Guptill created world record stand of 171 runs — highest partnership for any wicket in T20I cricket — which helped New Zealand level the series against Pakistan. LIVE CRICKET SCORECARD: New Zealand vs Pakistan, 3rd T20I match at Wellington

The free live cricket streaming of the third T20I between Pakistan and New Zealand can be accessed at PTV Sports, but the New Zealand fans might have to shell out money for watching the game on Sky Sport. In the ongoing series, both Pakistan and New Zealand have played remarkably well  and will hope for another win in the final T20I. For New Zealand, this game is even more important because it will be their last outing in the format before the ICC World T20 2016. Live Cricket Score & Updates, Pakistan vs New Zealand 2016, 3rd T20I at Wellington

Live streaming of cricket matches is rapidly becoming a rage among cricket fans. Those who are on a move and cannot watch their favourite cricket stars in acti0n, can always tune into the official live streaming links. However, one needs to be cautious for he or she may end up on objectionable pages on the internet. 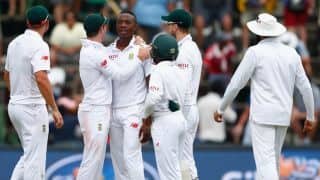 SA 329/5 in 90 overs│Live Cricket Score, South Africa vs England 2015-16, 4th Test at Centurion, Day 1: South Africa finish with momentum on their side