Pakistan find themselves in deeper strife after Asad Shafiq was cleaned up by Matt Henry for one. Pakistan are 20 for 3.

Shafiq followed Younis Khan back into the hut, who was the second wicket to fall as Pakistan found themselves in a hole early in the second One-day international at Sharjah. Mitchell Mcclenaghan accounted for Younis’ wicket who scored a mere six runs. Younis had a stroke of luck early in the same over when he was given out LBW but it turned out to be a No-Ball when the decision was reviewed. Ahmed Shehzad was the first Pakistan wicket to fall in the very first over for a duck.

Earlier Pakistan had won the toss and elected to bat first in the second One-day international (ODI) at Sharjah. Both teams have tinkered with their playing combinations for this match.

While Pakistan have made a solitary change to their line up from the previous game as Sohail Tanveer replaces Umar Gul. New Zealand on the other hand have made as many as three changes with Corey Anderson getting a look in instead of Jimmy Neesham who has struggled with the Bat lately. Also Kyle Mills and Nathan Mccullum make way for Matt Henry and Mitchell Mcclenaghan. New zealand have seemingly opted for the horses for courses approach, expecting this pitch to assist seamers more than spinners. 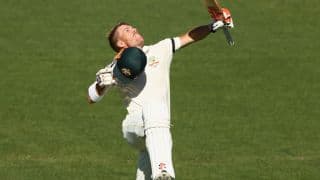 David Warner making most of the best phase in life