New Zealand, on the other hand, was inconsistent with the bat.

After a  thrilling Test series between the two teams ending in a 1-1 tie, Pakistan and New Zealand are now looking to gain momentum in the build up to the ICC World Cup 2015. Pakistan drew first blood as they beat the visiting New Zealand team by seven wickets.

Although Pakistan won in a convincing fashion, it wasn’t a one-sided match.  New Zealand gave a good fight until the last over of the match in search of the victory. But it was the Pakistan batsmen who got the better of New Zealand bowlers to go 1-0 up in the two-match rubber.

Considering Pakistan’s performance in the first match, almost all the bowlers contributed well, especially Sohail Tanvir and Mohammad Irfan, who claimed a couple each. However, considering their batting performance in the first match, it was mostly about one batsman, Sarfaraz Ahmed, who took apart the New Zealand bowling as he scored an impressive 76 off 64 deliveries including eight boundaries and a couple of big sixes with a strike-rate of 118.75.

Apart from him, it was Umar Akmal who too played his part with 27 runs including three boundaries and a six with a strike-rate of 192.85 at the end along with Sarfaraz to help Pakistan earn the victory by seven wickets.

New Zealand, on the other hand, was inconsistent with the bat as they lost three wickets in the first three overs. It was due to a couple of partnerships in the middle overs that helped the Kiwis to keep their batting order on track. Opener Martin Guptill and Corey Anderson put up a 46-run stand for the fourth wicket while it was Anderson and wicketkeeper-batsman, Luke Ronchi, who put another strong 51-run stand for the fifth wicket.

Apart from these three batsmen, none of the others reached double figures. The bowlers were not too impressive as well as it was Mitchell McLenaghan who claimed the only wicket for the Kiwis in the match with the rest of the two wickets being run-outs.

Overall, it’s clear that although being a closely fought contest, Pakistan had the upper hand and it would be the hosts again to watch out for in the second clash as well as they tend to move in with the same mindset and approach.

While New Zealand would try to figure out the wrong areas from the last night’s game in just 24 hours, they will have to come up with a different mindset and approach if they want to draw level in the series.It won’t be surprising if both the teams manage to go for a change in the squad and rotate it keeping in mind the World Cup ahead which in fact would be good for both the teams. 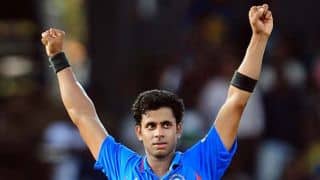