Ross Taylor was declared Man of the Match because of his brilliant hundred.

Another gutsy innings by Younis Khan and a patient 41 from youngster Asad Shafiq saw Pakistan through on the fifth Day as the second Test of the three-match series finished without a result. New Zealand were in the game when Trent Boult’s reverse-swing restricted the hosts to 75 for four, but since then Younis and Safiq formed a timely 74 run partnership and played out 142 balls to help Pakistan to retain the 1-0 lead in the series intact.

For New Zealand, this performance will give them a lot of confidence when they will take on Misbah-ul-Haq’s Pakistan in the third and final Test of the series. New Zealand were the dominant side over the last five days. Nobody expected the Kiwis to put up such a brave fight and after this Test, Brendon McCullum’s team will be taken more seriously by the Asian giants.

Pakistan were given a target of 261 in 72 overs after McCullum took a bold decision to declare the innings just after the first drinks break on Fifth Day. This approach of McCullum signified the attacking though process of the current bunch of New Zealand cricketers.

Earlier, Ross Taylor scored a counterattacking 133-ball 104 to keep his team’s hope of upstaging the Pakistanis alive. His 133-ball 104 was probably the best he ever batted in this part of the world. On a turning track, against good quality spinners, Taylor played his natural game. He was well supported by Mark Craig. Tim Southee gave the finishing touch of the New Zealand innings with a five-ball 20.

All nine wickets that fell in New Zealand’s second innings went to two Pakistani spinners, Yasir Shah and Zulfiquar Babar. Yasir got his first five-for of his career while Babar got the rest. The left-arm spinner picked up eight wickets in the game and continued his good show.

Pakistan had a poor start in the second innings as Southee removed Taufeeq Umar in the second over of the innings. New Zealand bowlers were bowling tight line and length as Azhar Ali and Shan Masood had an uncomfortable stay at the wicket. But they fought it out and carried the team through to lunch.

The post-lunch session saw the Kiwis fighting back in the game. Pakistan lost three quick wickets during the later part of the session. Azhar Ali fell to a full toss from Craig; then Boult’s reverse-swing caused the dismissals of Masood and Misbah in quick succession.

The Pakistan skipper registered his sixth Test duck as the game was interestingly poised at that moment. But since then Younis and Shafiq took over and rescued Pakistan. New Zealand would have expected more from their spinners on fifth day pitch. But only two wickets fell to them, one of which was off a full toss and the knock-out punch did not come. Taylor was named Man of the Match for his heroics with bat. 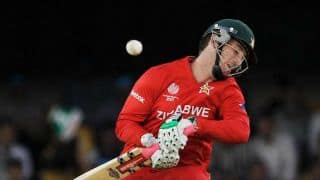