Pakistan would like to keep their dismal show behind and play for pride in the fourth ODI at Dunedin on Tuesday against New Zealand. The host have outplayed Pakistan in every department after the bowlers failed to stop the flow of runs in the death over in the second ODI. However, it has not been a pleasant outing for Pakistan. Inzamam-ul-Haq, Pakistan’s Chief Selector, expressed displeasure on experienced players unable to bring their A game forward. New Zealand, however, are having a splendid home season. They whitewashed West Indies in the ODIs and are now keen to whitewash Pakistan as well.

Pakistan had a great second-half in 2017. They won the Champions Trophy followed by the return of international cricket through World XI that the host won. They also won the limited-overs series against Sri Lanka. However, Pakistan have been unable to continue that form in 2018. Pakistan would hope to find their lost mojo in the remaining two matches.

The only thing both the teams would hope for is the rains to stay away. The first two ODIs were marred by rains that reduced the target for the teams. But to their dismay, rains could make their way again at Dunedin on Tuesday. 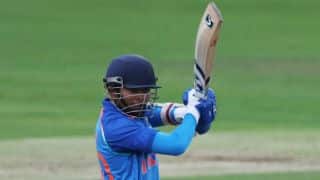