Kane Williamson s 10th ODI hundred powered New Zealand to first ODI 61-run win against Pakistan at Basin Reserve in Wellington. After being put to bat, New Zealand put up 315 for 7 on board. New Zealand also rode on the fifties from Colin Munro and Henry Nicholls. In response, Pakistan came not even close to being competitive. Tim Southee s early strikes left Pakistan tottering at 37 for 4 by the 9th over. However, they found some momentum with the help of Fakhar Zaman s unbeaten 82 until rains decided to spoil the fun.

Williamson mastered the windy conditions. The umpires were constantly keeping a check on the bails which were being blown away constantly and stopping play. The pitch had some uneven bounce and with the wind, the pitch was all the more unpredictable. However, Williamson ensured he continued to portray his cover drives and pull shots to keep the game in New Zealand s favour. His knock saw 8 fours and 1 six. His 117-ball 115 knock came to an end in the 48th over.

Earlier, Martin Guptill and Munro provided a strong foundation. Guptill played the second fiddle while Munro, not for the first time this season, went all guns blazing. Munro was dismissed for 35-ball 58 as Hasan Ali handed visitors their first breakthrough. Guptill, Ross Taylor and Tom Latham fell in succession as Pakistan bounced back. New Zealand were in some sort of trouble at 198 for 4 when Williamson and Nicholls steadied the ship. Nicholls scored a 43-ball fifty to support his captain. Southee made a valuable contribution with 7-ball 12 not out helping the score breach the 300-mark.

Pakistan s challenge began when they lost their top-order cheaply. Babar Azam and Azhar Ali were trapped in the front within the first over. New Zealand continued to torment the Pakistan batsmen. Mohammad Hafeez was left stunned by Trent Boult s short ball while Sarfraz Ahmed was LBW by leg-spinner Todd Astle. Pakistan were languishing at 54 for 5 and a win for them was far sighted. Fakhar then took the matter into his hands. He put up a 78-run stand with Shadab Khan, before the latter was picked by Boult for 28.

Fakhar later put up a steady partnership with Faheem Ashraf of 32 runs until rain ended the first ODI in favour of New Zealand. 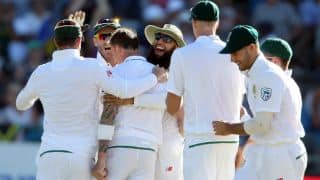 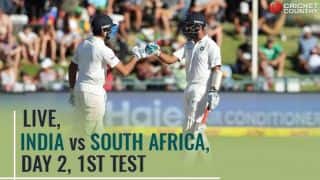