Pakistan and South Africa lost their warm-up encounter against Australia but handed defeats to West Indies. One can expect a battle of equals.

Earlier this month, the men from the Pakistan and South African camps clashed in a familiar setting in ICC Champions Trophy 2017. South Africa were expected to rout the already down Pakistan side. In one of the most remarkable turnarounds in cricket, Pakistan surpassed the South Africa hurdle and went on to register three more consecutive wins to become the eventual winners. At Grace Road, Leicester, when Pakistan Women take on their South Africa counterparts, Sana Mir s girls will look forward to replicate the Men in Green.

Sana made it clear at the press conference that the Pakistani girls are inspired by Sarfraz Ahmed and his boys and wish to carry the good work forward. Like the men s side, who entered the Champions Trophy as the No. 8 side, Pakistan Women too just managed to cling on to a qualification spot after coming fourth in World Cup qualifiers earlier this year. In fact, they had to depend on results of other matches. They have an uphill task against their South African counterparts who have a more balanced look to their side.

The Dane van Niekerk-led side have enough quality at their disposal with the captain herself Lizelle Lee, Laura Wolvaardt, SuneLuus, Mignon du Preez, MarizanneKapp, Shabnim Ismail and Trisha Chetty in their ranks. Pakistan have to pull out a special show in order to get better of their African opponents.

South Africa are ranked sixth in the ICC rankings, while Pakistan follow them at the seventh spot. Van Niekerk said there is little pressure on South Africa that will allow them to play freely.

Everyone s fit, everyone s excited with a few nerves creeping in, but that s natural. Hopefully we can contain them and just go out there and do what we do best.

The team are ranked No. 6 six in the MRF Tyres ICC ODI rankings, but Van Niekerk believes that the rankings do well in helping them with not having to deal with the pressures that other, higher-ranked sides have to deal with. She also firmly laid out her side s objectives for the tournament.

We re coming into this World Cup without the big pressures that most of the other teams have to face. We re not defending champions like Australia, World T20 holders like West Indies and we don t have the weight of being the hosting nation and feeling like the eyes of everyone here are on us, said Van Niekerk to the press on the eve of the match.

South Africa s strength lies in their bowling and they are amongst the finest bowling units in the world. In Shabnim and Kapp they have their best bowlers. Shabnim is quick and accurate while Kapp relies on pace and also swing. In Kapp they have the No.1 ranked ODI bowler and No. 2 all-rounder.

Meanwhile, du Preez is set to become the first South African girl to appear in 100 ODIs. The other girl to watch out for will be the teen sensation Wolvaardt. Last year, only 17, she became the youngest (male or female) South African to register an international century. She continues to be in good touch.

With enough firepower in their top-order, good all-rounders and a fiery bowling attack, this South African side has the elements to repeat their feat of 2000 and reach the semis, if not better it.

Pakistan lost to India, Sri Lanka and South Africa in the qualifiers, but they managed to beat Bangladesh, Papua New Guinea, Scotland and Ireland. But this Pakistan side have enough promise to stage an upset.

Their strength lies in their batting with hopes rested on the experienced Bismah Maroof, Javeria Khan, Nahida Khan and Nain Abidi, all 4 of them playing their third World Cup. And then there is Sana Mir, one of the 7 women and first Pakistani to complete the ODI double of 1,000 runs and 100 wickets. Her off-spinners will come in handy in tying down the South Africans. Teenage left-arm spinner Nashra Sandhu will be another key player in the Pakistan unit.

Both the sides lost their warm-up encounter against Australia but handed defeats to West Indies. One can expect a battle of equals. 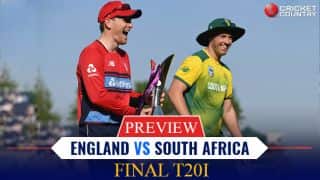