Pakistan struck back to get rid of Hashim Amla and Faf du Plessis in quick succession, against South Africa.

Pakistan struck back to get rid of Hashim Amla and Faf du Plessis in quick succession, against South Africa in their ICC Crickert World Cup 2015 match on Saturday.  Rahat Ali provided Pakistan the breakthrough they needed, as he got Faf du Plessis caught behind the wickets for 27.In the next over, Wahab Riaz had Hashim Amla caught behind for 38 by Sarfraz Ahmed. LIVE CRICKET UPDATES AND COMMENTARY: Pakistan vs South Africa in ICC Cricket World Cup 2015

South Africa were 67 for three after 11 overs, and need 165 more runs to win from 36 overs.  Du Plessis looked confident ater a scratchy start as he scored 27 from 29 balls with the help of three boundaries and a six. On the other hand, Amla smashed eight boundaries to score 29-ball 38 before falling in the 11th over.  LIVE CRICKET BALL-BY-BALL COMMENTARY AND SCORE UPDATES: Pakistan vs South Africa in ICC Cricket World Cup 2015

Earlier in the innings, Both Hashim Amla and Faf du Plessis were cautious after the early wicket but they have opened up and have also started to score quick runs in this powerplay. Amla looked in tremendous touch as he slammed three fours off Sohail Khan in the sixth over to provide his side some much-needed momentum. The bowler had earlier troubled du Plessis outside the off-stump but the batsman did well to survive the initial scare.

South Africa were five for one after the first over. Earlier, Misbah-ul-Haq‘s half-century and Sarfraz Ahmed‘s rapid 49 were the only bright spots as Pakistan were bowled out for 222 in 46.4 overs against South Africa, in their ICC Cricket World Cup 2015 match at the Eden Park in Auckland on Saturday. South Africa will be chasing 232 as per the revised target according to the Duckworth-Lewis method.  South Africa were very impressive with Dale Steyn taking three wickets and Kyle Abbott and Morne Morkel taking two wickets each. 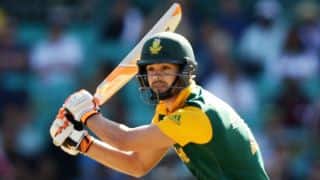