Sarfraz Ahmed was run out for 49 after playing a splendid knock for Pakistan in the ICC Cricket World Cup 2015.

Sarfraz Ahmed and Younis Khan added 62 runs in eight overs runs as they lead Pakistan’s revival against South Africa in their World Cup match. Sarfraz, who was ignored for unknown reasons so far in this World Cup, slammed a brilliant 49-ball knock which was studded with as many as five sixes and three hits to the fence. LIVE CRICKET BALL-BY-BALL COMMENTARY AND SCORE UPDATES: Pakistan vs South Africa in ICC Cricket World Cup 2015

Sarfraz slammed 21 runs as he came down the track and hit JP Duminy for three sixes in an  over, as South Africa’s strange tactics of using slow bowlers such as the left-armer Duminy, AB de Villliers and Imran Tahir backfired. The Pakistani duo of Sarfraz and Younis looked extremely comfortable against the slow bowlers and they added runs at ease. Pakistan vs South Africa in ICC Cricket World Cup 2015: Dale Steyn’s brilliance ends Ahmed Shehzad’s innings

Younis, who had a poor run in the earlier stages, stayed calm and confident as he gave himself the best chance in the middle to make a strong and confident start. Younis was on 19 off 23 balls when Sarfraz was dismissed. Pakistan vs South Africa in World Cup 2015: Shehzad, Sarfraz make confident start 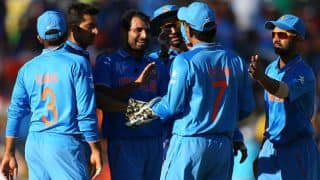