South Africa will be looking to maintain their winning run against Pakistan in the 29th match of the World Cup.

South Africa have bounced back from their loss to India and have registered emphatic wins over West Indies and Ireland, and their margin of the wins hint that the side led by AB de Villiers is peaking at the right time and it will be very tough for Pakistan to get the better of them. LIVE CRICKET SCORECARD AND BALL-BY-BALL UPDATES: Pakistan (Pak) vs South Africa (SA) in ICC Cricket World Cup 2015

On the other hand, Pakistan too seem to be shaping up well after poor matches against India and the West Indies in the Pool B. Pakistan trounced the United Arab Emirates (UAE) by 129 runs, but had a close game against Zimbabwe wherein their top order had flopped miserably. READ: Wahab Riaz suggests aggressive approach to counter South Africa skipper AB de Villiers

South Africa will be considered as the firm favourites in this clash. Their batting department has done an excellent job so far, and the likes of Hashim Amla, de Villiers and Faf du Plessis will be the key for the team which is considered as among the red-hot favourites to win the ICC Cricket World Cup 2015.  PREVIEW: Pakistan (Pak) vs South Africa (SA) in ICC Cricket World Cup 2015 match 29 at Auckland 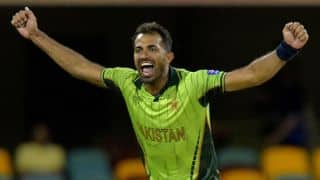