Niroshan Dickwella was unbeaten on 42. His partnership with Dinesh Chandimal remains unbeaten on 66 for sixth wicket.

Dimuth Karunarathne stole the thunder from Yasir Shah, as he played a brilliant knock on Day 1 of the first Test at Abu Dhabi. He, however, was run out for 93 after saving Sri Lanka from 63 for 1. Opting to bat, Sri Lanka reached 227 for 4 at close of the day. Karunarathne also added a valuable 100-run stand with skipper Dinesh Chandimal, who remained unbeaten on 60. Meanwhile, latest entrant Niroshan Dickwella was unbeaten on 42. His partnership with Chandimal remains unbeaten on 66 for the sixth wicket.

Chandimal was given leg-before to Yasir Shah on 42. The decision was overturned on review. His innings included six boundaries, while Dickwella hit 5 fours and a six during his aggressive knock.

Yasir, who began the day with 2 wickets, did not find much turn in the later part of the day. However, he relished to reach his personal milestone of 150 wickets. He equalled the record with Pakistan’s Waqar Younis as the joint second fastest to 150 wickets. However, it is Australia s Sydney Barnes who holds the record to achieve the feat in 24 Tests.

Earlier, Karunaratne had a solid opening stand of 34 with Kaushal Silva, before Hasan provided Pakistan with the breakthrough.

Hasan bowled Silva with an inswinger for 12. Yasir then dominated in the first session with successive wickets of Kusal Mendis and Thirimanne. 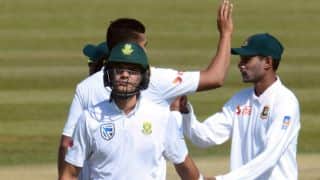 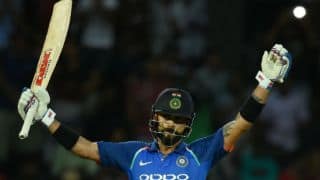