Sri Lanka s outing at Sheikh Zayed Stadium is proving to be a tough one as Pakistan yet again gained upper hand on Day Three in the first Test. Pakistani batsmen Asad Shafiq and Azhar Ali denied Sri Lanka a glimpse at hope stonewalling everything the visitors offered. With two quick wickets before lunch, Pakistan were in fear of a collapse but were steadied as Sri Lanka s lead was shortened by 225 at tea.

Shafiq along with Babar batted with composure and grit. Both batsmen hardly hit anything in the air; they mostly focused on singles and doubles. The pair kept out the likes of Dilruwan Perera, Lakshan Sandakan and Rangana Herath fending, blocking and nudging them on almost every delivery.

They brought up their 50-run stand in 154 balls with a rare boundary.

Both batsmen remained unbeaten on 38 and 37 respectively as Pakistan went to tea at 194 for 2.

Sami Aslam and Shan Masood owned morning session. Both struck fifties for their sides that brought down the deficit below 300 run mark. It just on the brink of lunch, that Perera and Herath scalped Aslam (51) and Masood (59) respectively. 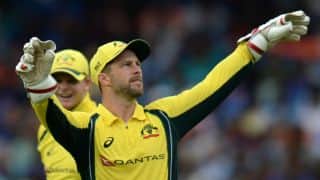