Azhar Ali recorded his half-century in 139 balls, 27th in 61 Tests for Pakistan.

Pakistan remained in control all through the day against Sri Lanka in the first Test at Abu Dhabi. It was combined effort from Pakistan s top order that helped the side near Sri Lanka s first innings score of 419. Heading into stumps on Day 3 Pakistan were 266 for 4 with Azhar Ali holding fort against a probing spin-attack.

Final session of play started in Sri Lanka s favour as they picked up Asad Shafiq s wicket first up. New-ball did the trick for Rangana Herath, who produced a thick inside edge off Shafiq s to get him for a gritty 39 off 119 balls.

Babar joined Azhar in the middle. The pair took their time in the middle in resurrecting Pakistan s innings. Soon, Azhar reached his half-century in 139 balls, his 27th in Tests. He along with Babar pinned down Sri Lanka s hope ball after ball.

They brought up their 50 runs stand in 93 balls as Pakistan went past the 250-run mark. It was in the very last over of the day that Nuwan Pradeep provided Sri Lanka a chance to celebrate. A loss of concentration saw Babar gift his wicket away for 28 ending the 71-run stand with Azhar.

Earlier in the day, it was Sami Aslam, Shan Masood, who got Pakistan off to a solid start. Both batsmen scored their seventh and third Test half-century for Pakistan. Amongst the bowlers, Dilruwan Perera and Herath gave Sri Lanka a glimmer of hope. However, that lasted only a few overs. 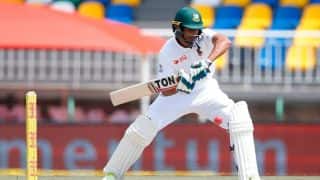